The End is not quite 'nigh' - official 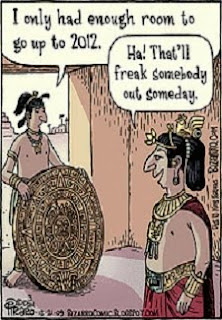 Regular readers will know I've been to (or near to) the end of the world a couple of times:

1. Ushuaia, which bills itself as such, being the southernmost city in South America (and, as someone tweeted this morning: The Mayans gave us Cocaine, Chocolate and Tobacco. We were fools to believe anything they say.)

2. Armageddo (or Har Megiddo) in Israel, which I chiefly remember for a rather racy snogging session in the underground tunnels the first time I visited.

But just a little word of warning from Death Star PR: George Lucas thinks the world will end in 2012 but what does HE know? It's not like he invented a giant planet-destroying laser or anything. Or like he has enough money to build it even if he HAD invented one...

So what would you be doing today if it really was The End?
Posted by broken biro at 09:30