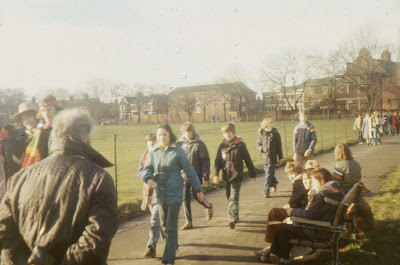 Did you ever wonder  whether you had crossed paths with someone years ago without knowing?

This picture just re-surfaced from a bunch of slides my dad gave me about 20 years ago. It's just a snap he took of me (light blue anorak, looking at camera, aged 13) doing a sponsored walk in Birkenhead Park in 1977.

I remembered, when I saw it, chatting to the three bigger boys in the far left of the picture. They had tied their legs together to make it a four-legged walk and they were very jolly and witty. I remember deliberately keeping near them for the banter although I didn't know them.

Skipping ahead to 1998... when I got the slides off my dad and showed them to my new boyfriend it turned out the guy with the headband and Doctor Who scarf was him!

I imagine it's quite rare to have documentary evidence that you have met significant others earlier in your life but wouldn't it be great to know about other occasions you have crossed paths with someone you didn't know at the time but later became a part of your life? My husband and I have both lived in this town for forty years and once worked in the same building at the same time, but we don't think we ever met.

Does anyone else have examples of this? I'd love to hear them!