It really IS 'Poet's Day' 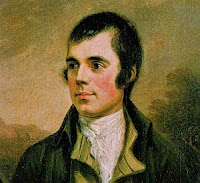 Visiting the hospital, I stopped by a bed and asked the woman how she was feeling.

'It's a braw bricht moonlit nicht the noo,' she said.

I nodded sagely and moved on. The chap in the next bed smiled . I enquired after his health.

Then I realised. It was the Burns Unit.

The Scots have some dire things to answer for - the Crankees, the word 'Hootenanny' and obviously Rab C Nesbitt (I don't include the deep-fried Mars Bar here, as they're rather good) - but they've brought us good things too: I've no complaints about whiskey or haggis, I like the accent and I'm a fan of Annie Lennox.

But the best thing the Scots ever did was to have a national holiday celebrating a poet!!

Not been to a Burns Night? You imagine a mysterious event shrouded in the skirl of the pipes, the swirl of tartan, the swill of 'the water of life'. It is all of this - but more. It's all about Burns. A poet. OK we're easily frighted by the daelect. But he's worth pursuing. And anyway that's not the point. He's a poet. And he isn't shut up in the back room of a pub, missed off arts listing pages, considered an embarrassement, of no value. No - he's a Poet! His words are celebrated. Even at the moment you bring out the steaming pile of offal that is the 'Great Chieftan o' the puddin-race' there is a pause for 'To a Haggis' (the poem the line 'Devil take the hindmost' is from). Fantastic.