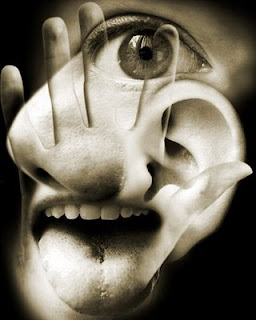 An interesting blog by InkyFool - (read it here) last week has led me in curious directions. It was about Synaesthesia - a neurological condition where, as InkyFool says: 'colours are perceived as smells, smells as sounds, sounds as tastes etc'. Interesting stuff and I'd expand on it but he's done it so well I need say no more.

A comment from Mrs M led me to this article in the Guardian - one chap's take on the first leadership debate was that Gordon Brown's name tastes to him of soil mixed with Marmite, Nick Clegg's reminded him of pickled onions and Spangles (whatever happened to Spangles *sigh*) and Cameron's was like ink and macaroons. Topical tie-in: tick.

Seems odd, doesn't it? But what if more people make these sort of links than we realise - possibly even you? It reminds me of a loose and unscientific piece of social research I pottered with a few years ago. (Science? BrokenBiro? Yeah - who knew?)

I forget how it started. It's not a question we ask each other, or information we volunteer. But for a while I asked everybody I met what their week looked like when they pictured it in their mind. Stop reading this for a second and close your eyes. What does next Tuesday look like? How do you picture August? What about ten years ago?

Mine's very dull, a bit like a diary - no colours - with the past petering out of my head to the left and the future heading off to the right. I was astonished by the answers I got. So astonished that I still recall some of them (no, of course I didn't write them down, I told you it was 'loose'):

There were many more. But no-one had ever discussed it before, there seemed to be the assumption that of course everyone imagined time the same way. Now isn't that interesting? Maybe some of us have other ways of thinking - unique to us and weird to other people - that we don't even consider. What? Doesn't everyone think the moon smells exactly like cardamom?

I'm going to continue my experiment now and ask you all  - what does your week look / smell/ sound like?

Oh, and here's a bit of a poem I just wrote about it:

I touch you, taste that scent of early hyacinth
like a waterfall that flashes blue and pink.
Feed me on violins, let me gaze upon
the salty sweet of your voice, call my name
and I will come to you with kiss of cinnamon,
hot as fresh-baked newspapers
whose words tickle like spider ants,
leave an after-taste of cathedral bells.