Naming the fish, and other creatures 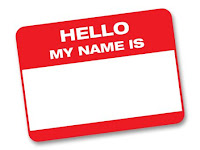 One of the powers and responsibilities of a writer is to name people that don't exist (or re-name ones that do and then claim they don't). Being chronically indecisive, I find this much harder than I ought.

Did I mention I'm writing a novel? Fifty thousand words in and I don't have a name for my lead character - a keen but accident-prone local authority worker who has to fight vengeful librarians and the undead. (I know! What can I say?)

Back in March, InkyFool opined 'a fictional character should have one dull name and one extraordinary name. It doesn't matter which way around.'  My own predilection is for the impressive: as Moptop mentioned recently that Isambard Kingdom Brunel can't be bettered in that department. But something extreme wouldn't suit an ordinary girl like... you see? Dammit! How can I sell the book if the lead doesn't have a name? Alright, it's not without precedent but...

This is like the trouble I had when renaming myself. I'd been divorced a long time and had chosen to wear the married name like a scar, but I'd felt more and more uncomfortable with it over the years - and then someone with the same name started writing successful novels - grrrrr. It shouldn't be that hard to change should it? Even dolphins have names for each other.

Proper names are poetry in the raw. Like all poetry they are untranslatable. (WH Auden)

And there are some doozies out there. When I used to work in a bank it was like being on a very slow episode of I'm Sorry I Haven't A Clue ("Please welcome to the Mortician's Ball - Earl Fire and Dame Nation, and from Australia - Digger Pitt"). We had customers called C Breeze (a sailor perhaps?), F Sharp (music teacher?), a firm called Costall & Deer and - I kid you not - a Mr P Ennis. My dad used to work with an old sea-dog called Barney Scattergood and a friend of mine swears she went to school with an Ophelia Dickie.

Needless to say I had a lot of bright ideas when it came to a new name for myself, especially as I was a performance poet by then. Would I follow in the unholy tracks of the vampire poet Rosie Lugosi and become Cruella Diverse? Or take a nibble off my chum Gordon Zola's block and become Wendy Dale? What about Helena Handcart? Gracie Spoon? Ann O'Malley? I dabbled with Clare Willow-Fish for a while but in the end I just went back to my maiden name because I couldn't take the responsibility!

(It's easier when you have a bunch of things to name - I named my goldfish alphabetically after my favourite movies as a teenager. But Citizen Kane ate all the others then died of indigestion. It's a good job I don't have children - for various reasons.)

So help me out here - give me a good, memorable-but-not-barking-mad name (first & last) for a thirty something English woman who gets into scrapes. You see - it's not that easy when you can only pick one is it?

The beginning of wisdom is to call things by their right names. (Chinese proverb)