Do what you please 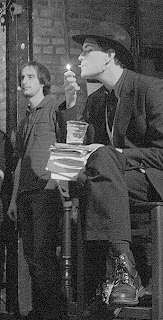 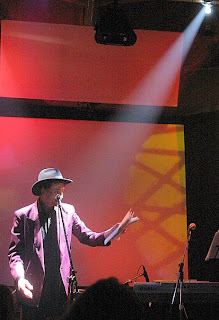 I just read something very inspiring that Alabaster dePlume said at the launch of his recent album.

I have touched on the odd poet names before - check out this post on the late great Hovis Presley and Elvis McGonagall (also great, but rarely late). But I don't think I mentioned Alabaster with his groovy hat and his gutter mouth and his gentle soul. I may not have mentioned Gordon Zola either (I was entertained the possibility of a double act with him... I was going to be Wendy Dale...but that's beside the point. Any ideas what MY whacky poetry name should be?

Here's some of what Alabaster said when he launched his new album recently:

What I read into this is that artistically we should do what pleases us, what we want to do, push on with what inspires us without too much thought into acclaim, commercial value, fashion and 'fitting in'.

That makes me feel better about the novel I've written - which I have enjoyed writing and still makes me laugh to myself. And the play - which was interesting to research. And the weird little stories which are coming thicker and faster now.

The album - Copernicus (or The Good Book of No) is most intriguing, by the way. I associate him with the sort of beat poetry I've seem him do at slams years ago, so the gentle, rather eastern melodies were a surprising counterpoint. Like the PR says: '...immensely personal and yet deliciously enigmatic, flitting as it does between caustic spoken word and beautiful instrumental lullabies.'  The digital version is 'name your price' and well worth downloading.

Here's a gorgeous stop-motion film for the opening track... I love the way the leaves follow her around!: