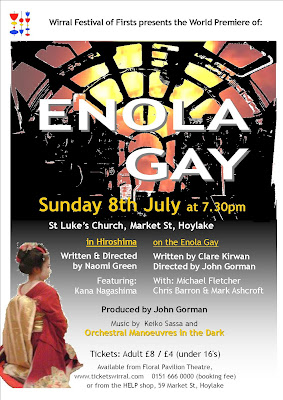 Eeek! The 'play what I (co)wrote' is premiering in just five days time here in Wirral as part of the Festival of Firsts.

We had the dress rehearsal for 'Enola Gay' at the weekend and for various reasons, it's the first time I've seen the whole thing together. The stage is split into two - half of it is the part I wrote which is set in the cockpit of the B29 bomber on it's fateful journey, and half of it is set in the new home of a young Japanese woman who has moved to Hiroshima to escape the fire-bombing of Tokyo.

I mentioned in an earlier post how John Gorman came up with the idea after meeting Andy McCluskey of Orchestral Manoeuvres in the Dark. What I haven't mentioned is that first we lost the original Japanese writer and then we lost two of the the three actors needed for the bomber crew (yes I know there were more than 3 crew on the Enola Gay, but this is theatre dahlink, we don't need to show everything). So there have been traumas along the way.

Also, it's being performed in St Luke's Church - a lovely venue but not equipped for the lighting we need.

But it's all systems go for the big night, the performers are all great (and I have very exciting news about one of them I'm not allowed to mention until the weekend for (his) contractual reasons). Fingers crossed your truly doesn't bugger up the sound effects!