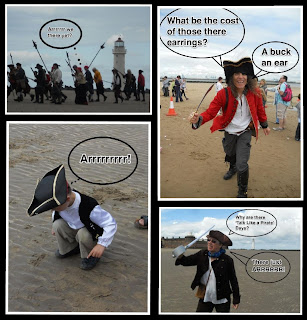 On 19th September it be International Talk Like a Pirate Day - so don't say I didn't be warnin' you!

Avast behind! (but enough about me).

It's important you be fully briefed on the 'arr's and the 'grrr's but if you don't want to be forkin' out for dusty great tomes like How to Speak Pirate: A Treasure Chest of Seafaring Slang

(which at least has a likeness of the great Cap'n Jack Sparrer gracing it's cover) wet your whistle now, for here be Talk Like a Pirate Day's official guidelines on how to actually be talkin' like a pirate:
There likewise be a whole heap of fascinatin' terminology at The Pirates Realm and at Black Bart's Pirate Glossary.
e.g. Dance the Hempen Jig : a hangin'
Jolly Roger : not what you be thinkin' you filthy-minded lubber
Loaded to the gunnells : dead drunk

And those landlubbin' university boffins have even coughed up this handy, if a bit scurvy Pirate Translator.

Go on! Unleash Your Inner Buccaneer