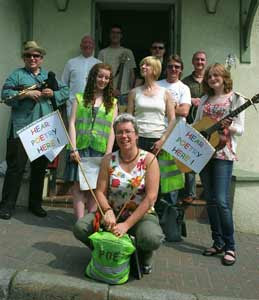 This Saturday I'll be joining fellow Wirral poets on a trip to mob the Wenlock Poetry Festival.

It's ok - we're in the programme. We're being egged on (as ever) by the ebullient John Gorman (he of Scaffold and Tiswas fame), who would have poets in odd socks on every corner if he could.

I've 'done' Oxton Secret Gardens' (right) a couple of times - where poets leap out from the rhododendrons at unsuspecting garden-lovers. After I had one irate chap going on at me for '...coming in here with your sonnetts and your villanelles and messing up the geraniums...' (I'm paraphrasing) I'm probably not doing that one this year, because here's the thing: Not everyone (whisper it) likes poetry. 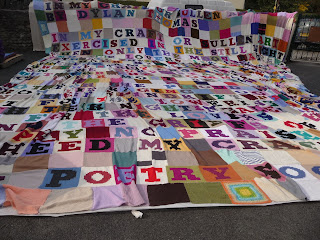 Much Wenlock is different. It's a poetry festival, see - they'll be expecting poems and that's what they'll get! Last year they had a groovy giant knitted poem, sculptures made out of books and a Poet Tree where you hung your smaller works.

But without that context, I confess I'm wary of spouting in the streets. (Apart from that time, giddy from the Glam Slam in my 2nd Most Glamourous Poet in Liverpool' sash, I did an impromptu recitation on the platform of Central Station, Liverpool.) 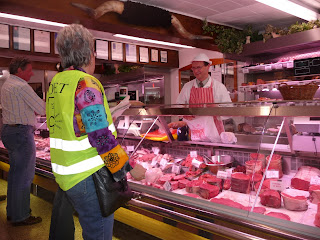 Faced with a clerihew or sestina, some people will quite literally run away (except the captive audience in the queue of Much Wenlock's famous butcher shop, who don't want to lose their place and will suffer anything). And if everyone involved doesn't do their best, most accessible poems, won't it just confirm people's worst opinions of poetry? Doesn't it then become the opposite of evangelism?

What do you think? Would you be delighted or provoked to mindless violence if you were accosted by a poet in the street?