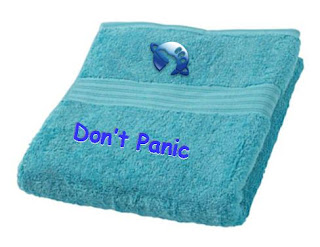 Did you know it's Towel Day?

Every year, around the known universe, fans of the late, great Douglas Adams do towel-related things to celebrate his genius.

I discovered Hitchhiker's Guide to the Galaxy in my teens - on radio, then the books. They are the works I most wish I had written. I love his fount of ideas and the way he marries comedy with deeper truths. 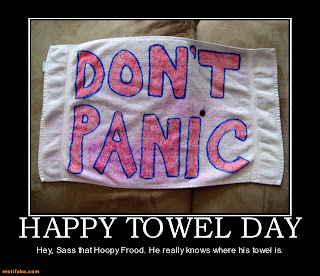 If you have never read it, and I urge you to do so, click here for a full explanation of the significance of the towel, which finishes with:

"...any man who can hitch the length and breadth of the galaxy, rough it, slum it, struggle against terrible odds, win through, and still knows where his towel is, is clearly a man to be reckoned with"

I blogged a towel-related story yesterday without having even remembered it was Towel Day, so I probably already have Betelgeusian* Brownie Points for that.

Despite the fact that I really don't like being told not to panic, some of my favourite quotes are from the first of the six books in the H2G2** trilogy:

Time is an illusion, lunchtime doubly so.

A man who no more knows his destiny than a tea leaf knows the history of the East India company.

Anyway, I can't sit here blogging all day - it's a beautiful day and I'm off up the nearest hill... with my towel. 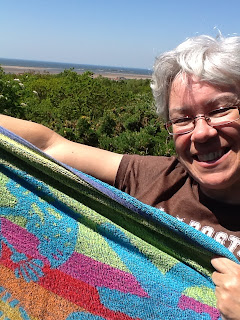 And here is the proof (and there's Hilbre Island in the background again!

** Geek shorthand for Hitchhiker's Guide to the Galaxy, and also an Adams-created alternative to Wikipedia which is seriously worth a browse: www.h2g2.com