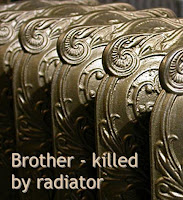 So this is the story I nearly named my collection after, but didn't - mum wasn't keen.

It's in Tales from a Broken Biro: There Will Be Ink

, and is a true story - as true as I remember it all happening when I was 8.


News traveled on short white socks as fleet as angels: my brother was dead.

It was a rainy playtime – he’d been playing off-ground-tick between the desks in a downstairs classroom. I didn’t see it but always imagine his thin, pale limbs crushed beneath the monstrous weight of that ancient radiator.

It was a fine old school.  The desks were autographed by generations of previous occupants: surfaces scarred, and undersides tattooed. In the big class downstairs, would one desk have my brother’s name carved into it?  It didn’t seem the sort of thing he’d do.

Not like me – I’d chalked pictures of made-up gods in the playground and invented a new religion (which was frowned upon).

No-one in her class ever read as well as him, Mrs Fransom had told my mother. “A lovely, quiet boy.” People always said that sort of thing about him.

I, on the other hand, was troublesome.  We were new to the area, and I’d blotted my copy book early on by wetting myself halfway through ‘Twinkle, Twinkle’ because I’d been too scared to put my hand up.  It’s funny what you remember and what you don’t.

My brother lay beneath monstrous plumbing as rain threw itself at the windows. He probably didn’t even cry. He just lay there, splayed out on the block flooring, gazing towards heaven like a martyred saint in a library book.

And it turned out quite quickly he wasn’t dead after all, but, just for a minute, I was giddy with the possibility.


N.B. No brothers were harmed in the writing of this story