A Ladybird Book Changed My Life 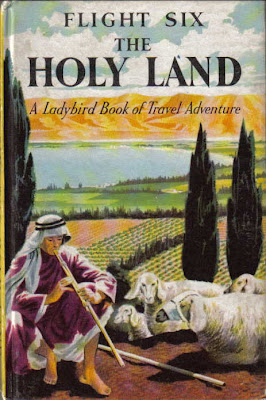 "Books can be dangerous.  The best ones should be labeled: 'This could change your life.'"  - Helen Exley

Did a book you read when you were young ever send you in an unlikely direction?

When I was about seven or eight I had amongst my Ladybird books a couple of slim volumes from their 'Travel Adventure' series. I think the central premise was a businessman father who took his children on some of his business trips.

I don't know why it attracted me so much, but there was one picture in 'Flight Six - The Holy Land' that stuck in mind so strongly I can still see it. The travellers visited a kibbutz and the picture was of pretty young women wearing dirndl skirts and picking oranges. The sun shone and everybody was smiling. My imagination was seized.

So when, years later, I finally escaped from A High Street Bank, where else was I going to head? It probably would never have happened if I hadn't read the book. I wouldn't have known what a kibbutz was and it would have sounded much dodgier (this was 1990 - just before Saddam Hussein started lobbing missiles at Israel to retaliate for the first Desert Storm) if I hadn't had this mental image of sun, oranges and, yes, dirndl skirts. 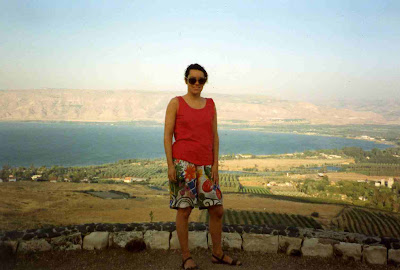 I think this photo of me must have been taken at more or less the same spot as the illustration on the cover. It's the southern end of the Sea of Galilee with Jordan in the distance. No dirndl skirt or sheep, but you have to admit they're pretty whacky shorts.

It certainly was an adventure - the rest of my which, I'll save for another time.

What books have changed your life?

"How many a man has dated a new era in his life from the reading of a book." - Harold Bloom