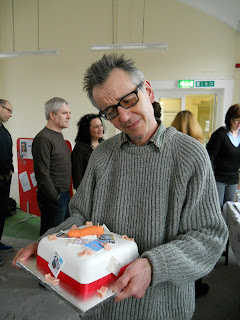 It's the 100th birthday of my library this weekend, with John Hegley tonight and an afternoon of delights tomorrow including Cream Tea, Wirrral Ukulele Orchestra and The Mayor.

Hegley's a sell-out sensation, we've bought enough wine and, unlike last time I have money for the tunnel fare if I give him a lift back to Liverpool.

On Saturday, the Mayor arrives at the right moment, says the right things, we've made enough scones, we can actually fit 30 Ukulele players by the counter, the glaziers have removed all the scaffolding and the plumbers have finished installing the central heating or at least made it safe. The 'great' and the 'good' of Wallasey arrive, having spontaneously decided to dress as 1911 gentry, photographers from the local paper capture our finest moments and the library is filled with LOVE which lingers through the winter like your favourite scent. 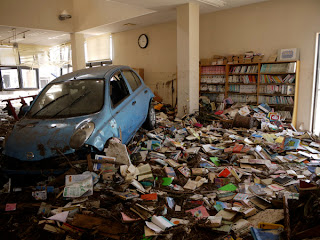 I have horribly miscalculated dates and Hegley thinks it's next year, the wine is left unattended and 'evaporates' before everyone has arrived, as people file away disappointed one of them falls down a hole the plumbers forgot.

On Saturday the Mayor arrives early just as someone is withdrawing that book with all the penises in the inside cover and the scaffolders are re-enacting Laurel and Hardy scenarios with long poles. It is ridiculously hot. The fire alarm has gone off for no reason so we are ignoring it. The Mayor has some kind of phobia of cucumber sandwiches. The ‘ok’ and the ‘mediocre’ of Wallasey turn up in shell suits and complain about the sandwiches. They have dried out in the heat (the sandwiches, that is) so we call them 'toasted'.

It turns out you can't fit 30 sweaty Ukulele players next to the counter – so they have to use the vertical space. My boss loses her speech and has to improvise – all she can remember is the inappropriate jokes about early 20th Century facial hair that I thought of but we discarded. There are grumblings amongst facial hair present. I have inadvertently bollocksed up the certificates of the writing competition prize winners - a fight breaks out and someone is fatally stabbed with a bic 9mm.

The untested plumbing system, combined with unseasonal temperatures, begins to overheat, starting a small fire in an untrampled corridor of dried out poetry. Within minutes, Rabbie Burns is up in flames. The fire alarm has been going off all afternoon so no-one pays any attention. Anyway you can’t hear yourself think for ukuleles. I realise I have spelt Ukulele wrong on every piece of publicity and invitation. So does the Ukulele leader. 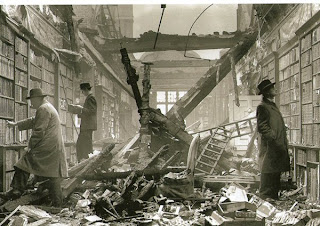 The boss of our department comes after all and chooses this moment to announce changes in staffing... 3 library assistants leave in tears. The fire spreads through Humour and Sport. A small child notices it but is told to ‘Shhhhhh’. Within minutes it has taken hold and there is a stampede to the door. The plumbers have disguised a hole with carpet, into which the Mayor falls, dislodging her coccyx and some piping which fountains water into the reading room. People only escape by surfing out on oversize books about maritime disasters. The photographer arrives in time to get a picture of the bedraggled Mayor lying in a pool of soggy Mills & Boons and scones.

The scent of roasted cucumber sandwiches lingers all winter...

Wirral library to celebrate centenary - What the Wirral Globe says... I think they're banking on the Best Case Scenario, but John looks a bit worried

Email ThisBlogThis!Share to TwitterShare to FacebookShare to Pinterest
Labels: library