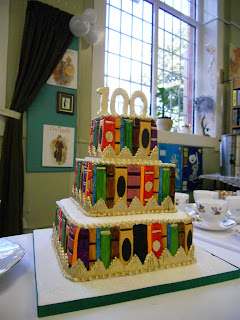 In case you were worried after my last post, I can now report that my library's Centenary celebrations went even better than 'best case scenario'.

For starters, we were presented with this fantastic cake by the sugarcraft group that meet in the library. A cake made out of books! Cake and books - what more could a woman want? (answers on a virtual postcard!)

Actually, lets start with Friday - comic poet John Hegley was on top form for his performance at the library despite it taking 4 trains to get to us from a gig in Wakefield! 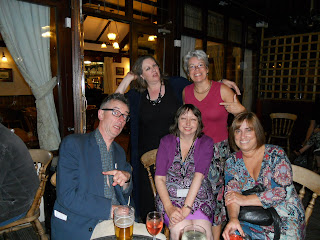 He did some fab new material and yes, we ended up in the pub again, and, yes I gave him a lift again and YES! (everyone kept checking...) I had tunnel money this time! What a nice chap, well worth seeing live if you get a chance - great comic timing, surprisingly good singing and he read some of his fave poets too (a bit stressful as he asked me to find specific poems 10 mins before he started... and we've lots of poetry.) 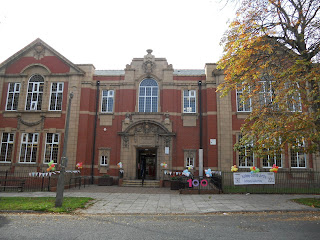 Anyway, Saturday was the warmest October day on record, and there was a Liverpool / Everton Derby on but we still had hundreds of people turn up to help celebrate our 100th birthday (and no plumbers... although they still haven't finished) 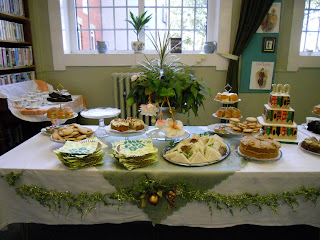 We laid on a splendid 'Edwardian' Cream Tea ... you can see my perfectly edible cucumber sandwiches at the front there, and none of the borrowed china was dropped and nobody drowned in whipped cream. 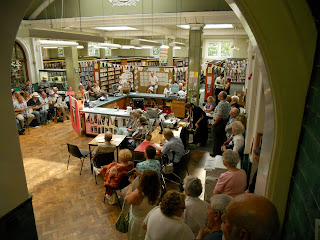 And the speeches and prize-giving went swimmingly and I didn't even drop all the certificates and the winners read beautifully, including Cath Bore, who has talked about the event in her blog. And I met a few old friends and colleagues, and did a LOT of mingling. I could mingle for England. 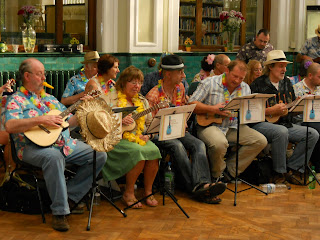 The Wirral Ukulele Orchestra were the highlight. It had been a bit touch and go whether they were coming or not right up to earlier this week, but they stole the show with lively renditions of everything from Rawhide to Delilah, with oldies, rock and roll, TV themes, you name it. I'll upload a snippet to YouTube to give you a flavour and pop it on here. 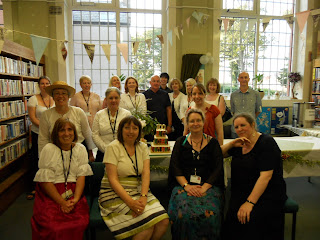 Another plus point - I wasn't the only person who dressed 'in keeping' (which happens to me a LOT) and I even managed to get a group photo of all the staff to prove it.