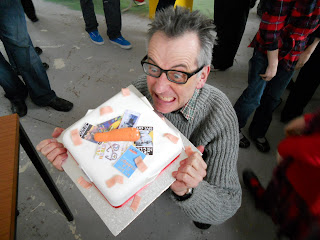 I was going to entitle this post: What to do if kidnapped by a 'comic beat poet' but to be fair - I wasn't exactly kidnapped and it was all my own fault.

Comedian/ performance poet/ 'people's poet laureate' John Hegley came to my library to do a writing and drawing workshop* today. And blooming marvelous it was too. He dealt very nicely with all ages (7 -70) with an intoxicating mix of comedy, rapid-tempo songs and mind-bending tasks that left everyone with a home-made booklet of their own thoughts, pictures and ideas.

It was life-affirming dammit. 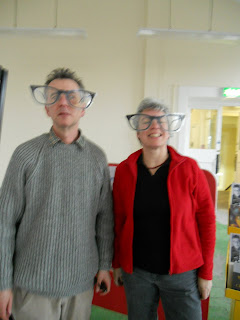 I made some special big glasses for the event (see right). Sorry the picture's a bit blurry. (You can't get the staff you know.) He's mostly famous for is glasses and his dog. I didn't make a big dog. That would have been silly.

Here's a short example which includes both:

Anyway, I could have just walked away - but I offered to give John a lift to the station... and then felt bad because he had lots of stuff to carry so said I'd take him to the Everyman Theatre where he has a gig tonight... but I was a bit over-awed and went into garbling mode...and then I didn't have my purse so had to ask for money for the tunnel... and enough to come back again please?... and then he was too early so he said let's have a drink ... and I didn't like to ask for money for the parking metre but I did want to have a drink because this was John Hegley - famous poet!... and we had a nice chat, then he said and by the way could I type fast? (I can!) and could I type some new stuff he'd written on the train... so then I wasn't in Kansas anymore - I was carrying a mandolin up Hope Street (rock 'n' roll!) and I was in a back room of the theatre, typing and trying to read his crazy-paving hieroglyphics while he distantly yodelled a sound check ... and I had a bite out of his quiche when he wasn't there and then tried to cut a straight line across it with a breadstick so it looked less like a bite (which doesn't work - in case you're wondering)... and then it was time to go so we filled my handbag with Green Room goodies and I came home. If I'd had any money I'd have stayed for the show. But hurrah - no parking ticket! 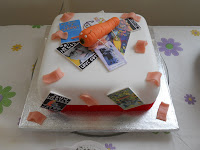 But I digress. How great was this cake - made specially by the sugar-craft group that meets at the library - with a dog shaped like a carrot and all his book covers on ( the most well-known are Glad to Wear Glasses

Visit John's Wild World Website and have your own fun and games, or listen to his unique style of mandolin-backed performance here.

My favourite poem is Love Cuts - a fine antidote to Valentine's Day excesses.

* Every time I hear the word workshop in this context, I think of my friend G who always used to say: 'It's not a workshop unless it involves heavy machinery'

Email ThisBlogThis!Share to TwitterShare to FacebookShare to Pinterest
Labels: poets