The Time of the Signs 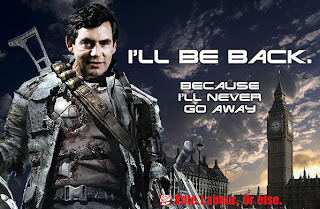 Ah to be in PR again, now that the election season's here! PR spindoctors may look down on poets as nerdy word-smiths, and poets may believe publicists to be soul-less pollsters, but the two are more alike than they think. I know - I've been both.

For both the challenge is to cram your entire, often complex message into a sound-bite - a few words that will capture your thoughts like a perfectly-preserved creature in amber. (Oops, sorry - the poet slipped out there.)

Political slogans and speeches sometimes  slip into the poetic. Dogberry has already gone into the whole 'Repetition, repetition, repetition' thing. (He didn't call it a 'thing' - he had a proper name for it. We (ex)PR types don't go in for the proper names of things - we never need to know.) The occasional revisiting of key phrases in speeches remind me of performance poetry. Obama could have won a slam with his 'Yes we can!'

But who wants to listen to an impassioned speech when they only have the attention span of a Hallmark card? This election campaign has resorted to the sound-bite, and, more than ever, the sight-bite. (Ooh - did I just make up a  new word? I love it when that happens!*) And thanks to the plethora of image-ma

*Alas no, sight bite is already at large, though generally used for video clips.king and info-sharing software it's been a creative campaign on the poster front.

It's already too late to see mydavidcameron.com  - an independent website which took 'that' Cameron poster 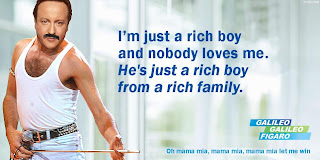 and made a template available for anyone with basic IT skills to play with. 250,000 people visited. I only just found out, but the site has closed. More about it here.

It'll all be over by the time you read this, but here are a couple of the rallies of this poster war:!.

And here's the Tory response.

It works the other way. Labour's attempts to allude to the dark Thatcherite 1980's by using imagery from Ashes to Ashes back-fired dramatically when they managed to achieve the impossible: The made David Cameron look sexy. 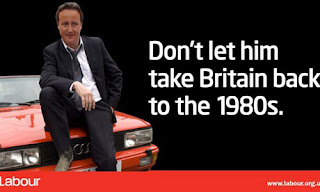 They had reckoned without the 'Gene Hunt effect.' The Tories practically reproduced the same poster (with a little more airbrushing perchance?). 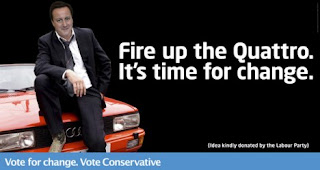 There are more of these on the Guardian website and more about that Ashes to Ashes flip at The Times.

I've gone on long enough, much like the election night.

Let's finish with my favourite, which simply takes the much-discussed ambiguity of Labour's 'A Future Fair For All' campaign slogan and does what we all would have done with it. I would never have come up with or agreed to a slogan like that. It was ripe for plundering. 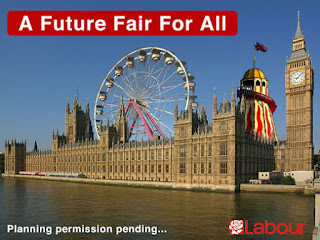