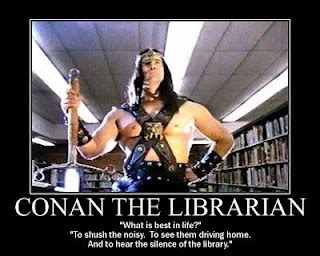 I will be starting my new library job bright and early on Monday afternoon, and so I’m looking for pointers, please.

(Unpleasant aside: An infamous Wirral poet recently confessed a guilty secret: he once masturbated in his local library. Only a poet would do this, I'd like to hope. He was very young at the time, and believed himself to be unobserved. Years later this turned out not to have been true – but even then he might have got away with it if he hadn’t chosen to make the surprise confession during a lull in proceedings while he compered a poetry reading. It was the first ‘filler’ he could think of – perhaps because I'd just mentioned libraries in a poem and word association in his head goes: library = masturbation.

‘I don’t do it now,’ he said, in response to our horror-stricken expressions. ‘I’m much more discreet.’  He was running out of things to say, so went into more detail.

There weren’t many people there, and later he was concerned it may have been imprudent to have mentioned it. We promised not to tell, but he’s written a poem about it and put it on Facebook so it feels like less of a secret now. Only a poet would do this, too.)

So I’m thinking: ‘Don’t touch the sticky books’ is sound advice for starters, but what else do I need to know? To be a master librarian, to be top shelf material?

Stamping? I am versed in the arts – ten years at the tills of a high street bank. Shushing? I have silenced whole rooms with a well-turned phrase. Stacking? Practiced at the north face of the the self-service salad bar. The ordering of things? An instinct for the alphabetical. The General Public? We’re old friends. Fines? I was a special constable. I’d still have the handcuffs, but my ex-husband got custody. What does it take to be first class and first edition? Recital of the Dewey Decimal system in Old Money?

There’ll be pitfalls too – I’ll tell someone they’re overdue and they’ll pull a fully-loaded scowl on me. I may file religion under fiction, travel under history, astrology under art. And who could argue? I may decide to do away with Dan Brown. Please God.

More posts about becoming a librarian:

Why are there no songs about librarians?

Why are there so many songs about librarians?