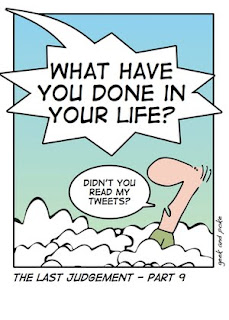 And now, in a change to our normal blog, this is a How to Get Started in Twitter post inspired by Maria Zanini - read her post about it here. Normal service will be resumed after this messages.

I'm going to run through some basics to help other people get to grips with Twitter - if they choose to do so.

Be aware: it can be addictive and It's Not My Fault*

Step two: Have a look around

(See an earlier post for a fine example of hashtag madness and some great people worth following imho (in my honest opinion... there's a whole language. You don't have to use it.) LOL.

Read more: Twitter's help pages should explain the terminology, or you could check out Blogging Bits' Twitter Glossary or, for the more advanced Seed the Web's Twittonary. I'll add one here eventually, but... did someone mention tea?

Image used is from this site about Libraries using Twitter

* If you've ever used an Apple Mac (and this might just have been the old ones) an American voice used to come out of it saying this when certain errors occurred. It never said anything else. Weird huh?