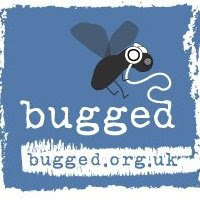 This post is later than I intended but is still just in time to let you know about Big Over-hearing Day tomorrow.

Promoted by Bugged, it is a mass 'happening' for writers in the UK. On July 1st they are asking you to eavesdrop, wherever you are - on the train, in the pub, at the checkout. What you overhear becomes the starting point for your writing.

It's a great exercise in observation for writers - which of us can say we haven't caught snippets of real gems in passing from random strangers? When coming up with characters it's so important to give them different voices, and what better way to get a feel for different ways of expressing yourself than listening - really listening - to other people.

I shall be positioning myself in one or more likely locations and will post again about it if I come up with something juicy - hope you join me! The intention is to build a piece of writing based on these 'eavesdroppings' but they're often beauties in themselves:

Stressed mother to small child on Merseyrail near Bootle: 'You do tha' again an' Bob the Builder's goin' in the bin!'

Bugged is also on here on Facebook and is organised by Glastonbury Poet-in-Residence Jo Bell.

p.s. does anyone like my new broken biro? I broke it myself.