I was a Magician's Assistant 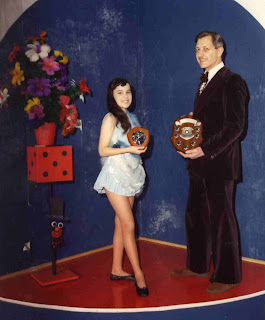 Not knowing how to describe myself in just a few words -as Twitter requires -I leave my description as: 'I used to be a magician's assistant but, after years of therapy, rarely appear out of an empty box these days.

This may sound like something made up to amuse but it is, of course,  absolutely true.

I was twelve. He was a workmate of my father's - a member of the Magic Circle - and he started a small (very small) 'School of Magic' in his basement every Sunday morning. It was mainly pubescent girls, and his wife would make us costumes - we'd dress as mini showgirls or circus animals for his magic shows.

Ahhh the roar of the greasepaint, the smell of the crowd... the vicious little teeth of Mr Wuffles, the dwarf white rabbit!

There was one trick where a dog 'magically' appeared out of an empty box - which was then shown to be empty again. Then me and another girl jumped out too with our special 'Ta daaaa!' faces on.

It was quite a tight squeeze in the empty box with my friend and the dog.

I know what you're thinking. It does sound a bit pervy when I consider it now - but it was all in innocence and lots of fun. I was 'Young Magician of the Year' in 1977 - admittedly in a local competition they ran themselves which only had four entrants. I themed my act around outer space, wore deely-bopper antennae and a silver lame bodkin - 'sadly' there are no pictures - and did my tricks in rhyming couplets:

I'm a Magician, come from Mars I do magic on the stars.

Perhaps, in retrospect, my parents were concerned - my dad came with me on Sundays and pretty soon he was learning the tricks of the trade and knocking up 'magic boxes' in the shed. So then I started being his 'glamorous' assistant at house parties for posh families and Christmas bashes for the kids of local factory workers.

It was hard work and a bit scary - wondering if they would be well behaved and enjoy it.  By now I was a glowering, spotty, teenager - and when I had my hair cut off it took away my special powers. After all, it was all done with mirrors.

I suspect we were both very glad when he stopped.

Update: I just found more pictures: The 'empty' box we used to appear out of and me in my lion costume.  Easily as dodgy! 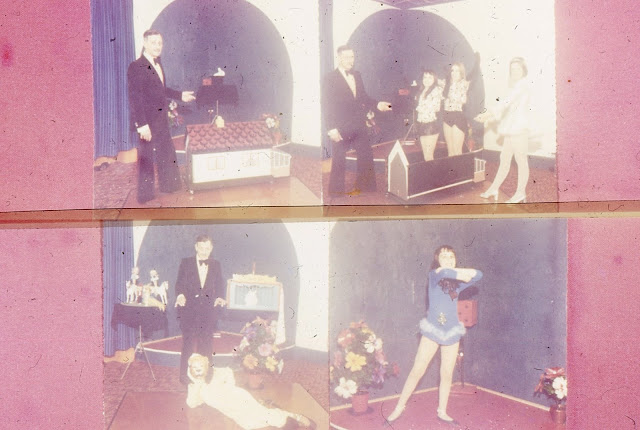