Writing on the Wall - Part II 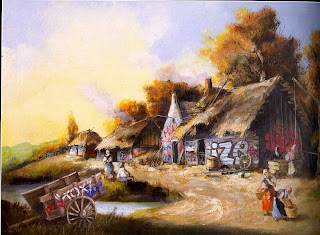 This continues from yesterday's post of quotes and pictures from street artist Banksy.

Of course, a lot of places are blighted by 'tagging' and hideous, pointless or offensive graffiti - but must we tar it all with the same brush?

Some interesting points were raised yesterday: Raining Acorns mentioned the windows of New York subway trains being obliterated with paint so you can't see which station you're at, but also directed me to her co-blogger Carol-Ann's marvelous post about a local street-painting festival - check it out. 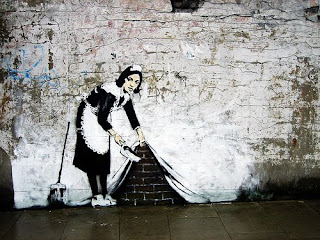 Meanwhile Dave, who has laboured long and hard over The Great Wall of Norfolk called us to reflect upon the pride of the wall-owner, the love of a good, clean wall. 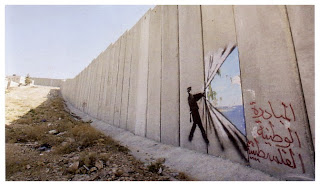 But I still think not every wall deserves to be revered.  Bottom right, for example, is the uniformly horrible concrete wall around the Palestinian territories of the West Bank. Whatever your political views, this picture is poignant and well-exercised. It makes you 'think about stuff' - which I suppose is the purpose of art (although a real artist would phrase that better!).

Incidentally, I don't know what the words next to it say, but don't they detract from the effect? 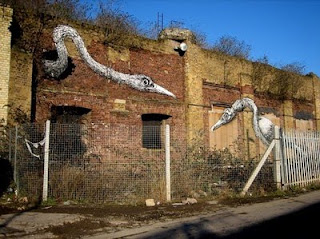 Meanwhile, I stumbled across this post on Don't Panic RTFM blog  about London's Hackney Road animal graffiti, an example of which is on the left.

Anyway...  this brings me back to the patio, and what to do with my side of my neighbour's 4 metre erection... which I'll come back to when ... or rather IF it is ever completed!

Email ThisBlogThis!Share to TwitterShare to FacebookShare to Pinterest
Labels: art