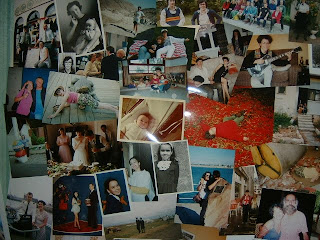 In my early teens, having wondered for years why teachers didn't write more clearly and buses didn't have bigger numbers on the front, I discovered I was shortsighted. It was a revelation to discover that the world wasn't as fuzzy as I'd first thought!

So I've worn glasses for about 100 years and think nothing of it. (Or I didn't until I made this collage of pics from my life for my 40th and the ONLY thing people commented on* was the SIZE of my specs in the 80's!!)

Here's me looking very trendy as the decade commences...

But here are the ones that everyone finds hysterical,
but which were BIG in the eighties...

It was the fashion - honest!
I wasn't trying to make a spectacle of myself.
Then a more chic, neutral tone for these whoppers...

But then along came the nineties, and I opted
for a more retro John Lennon look... 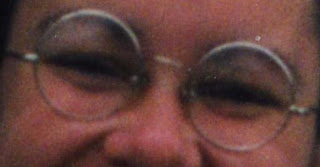 Ono!
(see what I did there?... my jokes just get cornea!)
I wore them for much of the nineties when I couldn't afford new ones.
But then I went for smaller - still trendy - frames - like these...

... and also the ones you see in my profile pic
and various permutations of the same.
No-one could take offence at them surely?
Boring!
Then when I started working in PR I went a bit 'whacky'
-it was in the contract... and there was a 'two for one offer'
so I got these stripy reactalight little beasties:

and the mad lattice red ones which I loved at the time
but then regretted... for the last 3 years!

Whaddya think?
* Apart from the really dodgy hairstyles which I have cunningly edited out here!
Posted by broken biro at 09:10