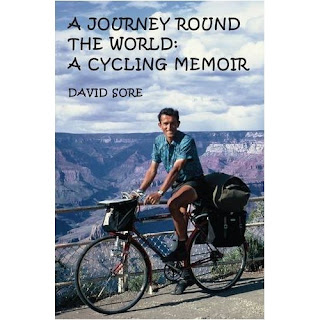 We've all had a dentist called Mr Paine, haven't we? Or come across Mr Bun the baker (ok, maybe not that last one.)

I used to work in a bank where there was a business account for Messrs Costall and Deer - I never found out what they did, but they sound pricey.

There's an article at The Behaviour Effect about whether people are influenced by their names.

A well-documented example of the phenomena is a legendary article in the British Journal of Urology by Splatt and Weedon.

I was on the lookout for books to illustrate what I'm talking about here, and came across: ‘A journey around the world' a cycling memoir, by David Sore.

We have a borrower who is always after Star Wars books (there's lots of them, you know!). His name is Luke Walker. I asked him if his middle name was 'Sky'. It isn't. It ought to be. I wonder if it is just co-incidence or he was influenced towards Star Wars because his name was so similar to the hero.

I've recall reading this post from the Inky Fool about cardinals and it reminded me of the aptly named Cardinal Sin of Manila - who I already mentioned in this post - which only one person read at the time. 8-( *sad face*

Anyway, it got me wondering if it would be possible to rise above your station through the clever choice of name? A sort of elective nominative determinism - which I'll be writing more about at some point, once I've collected enough silly names.

For example, who could resist promoting a Sergeant de Sturbance to Major, Private Punishment to Corporal or an Able Seaman T. Arch to Admiral?

What Masonic Lodge wouldn't be tempted to make Mr Flash their Grand Master?

More examples can be found at Ampers& but first, here's a bit of nominative determinism fun below from the 'I'm Sorry, I Haven't a Clue team' with late arrivals to the Vicar's Ball.

You can watch it while I contemplate whether to B. Silly with any of my characters names.

Email ThisBlogThis!Share to TwitterShare to FacebookShare to Pinterest
Labels: names