I'm always envious of people with great job titles, or even just funny or unusual ones. So here's my list of the 10 best or funniest job titles I've heard of.

If you work your way up diplomatic circles* you could be Envoy Extraordinary and Minister Plenipotentiary.

Not high-falutin' enough? My friend's great uncle helped to design the building of British ambassadorial buildings for the Empire** in the East Indies. His job title was: Chief Architect of the Eastern Hemisphere

But why on earth limit yourself to, well... Earth? NASA employ a Planetary Protection Officer. You may be wondering whether their role is to protect us from aliens or aliens from us. The answer is: both!

In a similar vein, Apple allegedly have this post: Senior Armageddon Avoidance Engineer. (It sounds scary, but having survived Armageddon once and accidentally missing it another time, I could be just the person!)

Back down to earth, a local authority in mid-Wales made the news last year by renaming lifeguards 'Wet Leisure Assistants.'

Councils are fond of strange projects, teams and persons. Mine has a Teengage Pregancy Strategy Group (who must sit in meetings where someone says: ''I know, let's get them drunk on alcopops and play Justin Beiber songs...") and the Older People's Modernisation Team - which presumably retro-fits grannies with gang tattoos and USB ports. But someone must be in charge. An Older People's Modernisation Team Leader perhaps?

Another council worker has done prize-winning work providing support to the victims of various kinds of intimidation. She's the Domestic Violence Co-ordinator. 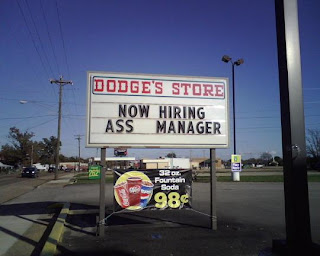 A friend of mine was Grand Master of the Masonic Lodge - it made him sound rather dashing but I was very disappointed on attending one of their 'Ladies' Night' dinners when no virgins were sacrificed.

Applicants for the job of S&M Administrator might be disappointed, too, to find it refers to Sales & Marketing. I got that from Worst Job in the World.

I have never had a job with a particularly unusual or amusing title. I suppose I could cross out 'Library Assistant' on my badge and write something more off the wall: 'Senior Junior Under-lender' perhaps. What do you think?

If you DON'T have, and have never had, a groovy-sounding job title, you can generate one using this handy Job Title Generator

If you DO have (or have had) a groovy-sounding job title ... or can convince us that you have ... I want to hear about it!

** Before they started on the Death Star, that is