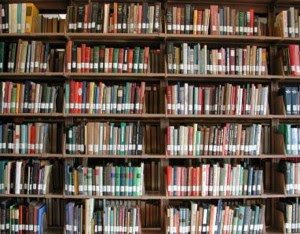 Inspired by the art of Liu Bolan, which I wrote about yesterday, I spent the night with my paints in an attempt to emulate one of his 'Hidden in the City' photographs.

Here I am, hiding in plain site in the library. I think you really will struggle to see me, so good is my camouflage.

Not bad for a first attempt eh?

And here's a bit of a poem about being invisible:

The other day, I became invisible:
stumbled into, trodden on and brushed aside,
pulled out in front of at junctions, roundabouts.
I tried smiles – which were returned unopened.
I raised my hand, but no-one let me speak.
I was stared through – not like I was a window,
but more a grey area or just a feeling
that has to be endured or struggled through.
I went home defeated, was not welcomed,
looked in the mirror. There was no-one there.