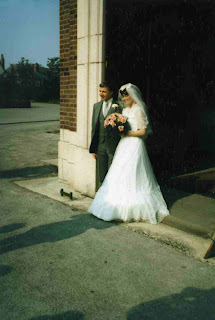 Yesterday was (would have been) my Silver Wedding Anniversary.

I know, I know - I was a child bride.  I'd have put a better picture here, but this is all I have: he got custody of the wedding pics - which is particularly galling when it was my mum and dad who paid for them. Moral: if you're going to leave your house and husband, plan ahead, book a van, go when he's not around and take all your stuff with you. There's only so much you can fit into a carrier bag and you know he'll change the locks.

In my defence, I ought to mention that I left in a hurry. There was a broken down door involved, and a hammer raised (to 'fix' me, not the door).

So anyway, here's my anniversary poem that I have been wheeling out about this time over the last few years,...

I was an end of season
bargain basement bride
and I thought you looked dashing
in your best suit – blue grey
(those were the days before
I knew I had the choice,
that some materials are sensual, soft
and others rough, always rubbing
you up the wrong way).

Who'd have thought it?
A quarter of a century
since you took this woman
to be your wife.
And where are you today
you bastard?

We tripped back to mum's
for the hired-in buffet – too posh –
and everyone nervous of
the silverware and frills, none of us
knowing what things were:
I'd never had pavlova, never
even been to a wedding.
I'd do things differently
with hindsight – a bigger party,
cheap and cheerful, everyone I knew –
oh, and I wouldn't
have married you.

Wherever you are*, just be grateful
for the miserable years we were spared
and some things we think are 'forever'
turn out to be short-lived affairs.

*Actually, I know exactly where he is... to be continued