This is a year of anniversaries for me, so forgive me being nostalgic

It's 20 years ago this week that I first went to Israel.  As explained in an earlier post, the idea was planted in my head by this early Ladbybird book. I had been working in a bank for ten years, and it seemed that it would take drastic action to whisk me from that particular warm bosom of security. About to be transferred from a lucrative secondment back to my branch, I decided to withdraw myself from the bank and See The World.

I resigned in August 1990 and signed up at Kibbutz Representatives in Manchester to volunteer in a kibbutz for 3 months.

Also during August, a little-known despot called Saddam Hussein from a hitherto unremarked country called Iraq decided to invade Kuwait. Not the best time to be embarking on a visit to the Middle East, perhaps, but everyone agreed that it would 'all blow over quickly'.

So early in September myself and five strangers turned up at Ben Gurion airport, Tel Aviv in the middle of the night, climbed willingly into the van of two swarthy, gun-toting chaps and allowed them to drive us into the semi-desert between Jerusalem and Hebron. 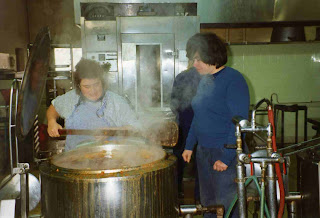 Over the course of the next three years (it's a long story!) I had many amazing experiences and met extraordinary people: I lived on two different kibbutzim, working in a kitchen, glue factory, baby house. I slept in the open in the desert, climbed Masada, stayed in a convent in the City of David. I fell off a mountain. I fell in love. I got drunk, stoned (real stones), bombed (real bombs).  I might mention these from time to time, but all I'm doing here is marking the occasion. 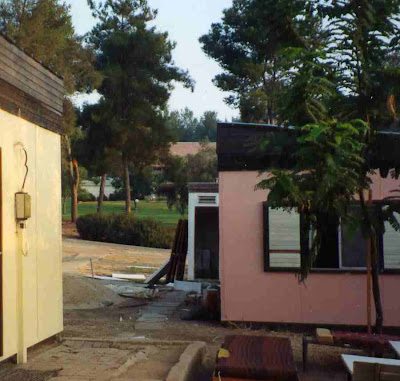 Top is Kibbutz Beit Guvrin from a distance and me and Rachel with the gas masks we were issued.

Above is the kitchen in Kibbutz Alonim - we had the biggest pans of soup I've ever seen!

Left is the volunteers' compound at Beit Guvrin

Below left is the BG Bond glue factory - considerably different work to the orange picking that Ladybird book had lead me to expect!  And Below right is the pool at Alonim. 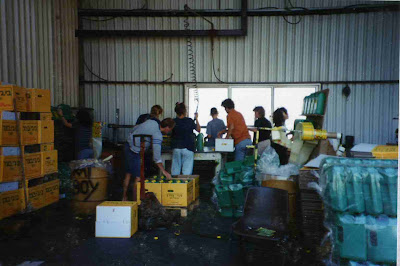 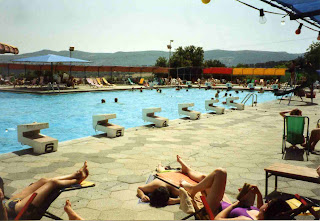