Bringing Back the Dead 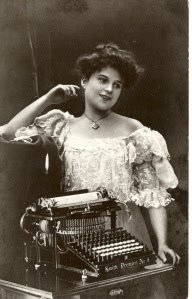 I'd always intended to be a best-selling novelist. That was always the plan. But life got in the way. You - of all people - understand that.

I have several books on novel-writing. It's nice to have books about writing to browse through. It makes you feel like you're writing, when really you aren't. No, really - you aren't.

The beauty of having several books on novel-writing is that you will generally find someone who agrees with the particular way you choose to plan, plot and manipulate (it all sounds so very scheming doesn't it?) the Best-seller. I have books (Novel Writing: 16 Steps to Success)that recommend planning everything in minute detail before even thinking of writing a word - hello spreadsheets! - and others (Creative Novel Writing)that recommend starting at page one with a vague feeling of what you want to write about and ploughing on to the end.

The one aspect they all agree on is one that does worry me. You have to know your genre.

My First Novel (current location - under the bed, current status - dusty) would have been a redemptive tale in the saga/mystery/romance mold.

But this new beastie isn't so easy to categorise. It was planned out (on the spreadsheet) and begun as a public sector satire with an engaging thirty-something heroine bumbling her way through local skulduggery in a Beiderbecke Affair sort of way. File under: contemporary fiction, comedy.

I can't put my finger on the precise moment I decided to bring back the dead.

It was going according to plan and I was about halfway through a first draft, but I was a bit bored to be honest. One (maybe all) of the books suggested that if you find yourself flagging you should introduce a new character or twist. When you're writing comedy the trick is to exaggerate the normal until it becomes funny, so maybe it was just a logical extreme I went to and never came back. I didn't intend to jump on a zombie bandwagon (and this was last year - it's all vampires now anyway) and they aren't really the point of the story.

The trouble is - publishers like genre (see a sensible answer to a similar question here) because genres have ready-made audience. But mine isn't a horror novel. It's a satirical comedy... with just a tiny few gruesome (yet amusing) scenes and undead characters. I think it's funny: How would local authorities react? There'd have to be a strategy, inclusion issues.

I like the idea of messing with genre, subverting the cliches. Tarantino did it to brilliant effect in From Dusk Til Dawn: I had seen no publicity about it and was gob-smacked when, half-way through the movie it changed genre (crime thriller to horror).

Is it OK to mess with genre? Do you think it might work?