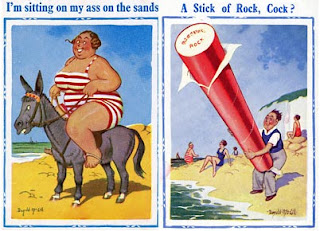 Readers of a sensitive disposition should avert their eyes now.
It is time to acknowledge the place the limerick holds in impolite society.
There is something about this poetic form that lends itself rather too well to the lewd, the crude and the downright scattalogical. It is, I like to think, a saucy postcard from Poetryland.
Yesterday I dabbled in its origins, early examples and some favourites. But now to the 'hard' stuff. First some lubrication, all from David Bateman's Curse of the Killer Hedge:
There was a young man from Llanfairpwllgwyngyllgogerychwyrndrobwllllantysiliogogogoch*
With a trans-Menai-Strait-travelling cock
From his home he could screw with
A girl in Bontnewydd
That happy young man from Llanfairpwllgwyngyllgogerychwyrndrobwllllantysiliogogogoch
A singer who came from Milano
Had privates made out of Meccano.
He sang bass-tenor, but
By unscrewing one nut
He could also reach mezzo-soprano  (ibid)
A sensitive aardvark called Mingus
Found foreplay hard work with no fingers.
But his praises are sung
For his fourteen inch tongue
Gives his ladies a pleasure that lingers. 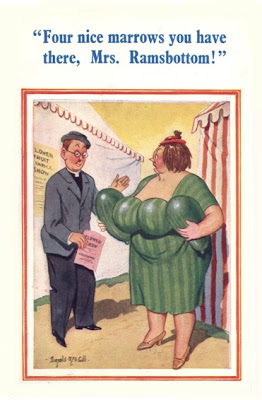 Right, that got rid of them - you're not still reading are you? I did warn you. Now to the filth.
I was told these (apart from the final one) by a respectable god-fearing lady dentist at the wedding of mutual friends. It has lead me to the conclusion that a significant number of the best limericks have an ecclesiastical bent, and indeed, a bent ecclesiastic.


There was a girl from Aberystwyth
Used to kiss with the lips that she pissed with.
By way of adventure
She fitted a denture
Now she's got a front bum she eats crisps with


The once was a Bishop of Birmingham
Who rogered young boys while confirming 'em.
To comply with his wont
They'd bend over the font
As he pumped his episcopal sperm in 'em.


From deep in the crypt at St Giles
Came some screaming that carried for miles
The curate said: Gracious!
Has Father Ignatious
Forgotten the Bishop's got piles?


When the holy ghost came, say traditions,
Mary acted without inhibitions.
She had God on her side,
And then had him astride,
And in several other positions. (David Bateman, again)

I shall return to this form when you're least expecting it as I haven't shared any of my own with you. But meanwhile you can find more filthy limericks in The Mammoth Book of Filthy Limericks (Mammoth Books)

The final word should come from this (author unknown) limerick I found online for National Poetry Day 2020:
There once was a man from Nantucket,
who, tired of life
inside a lewd limerick,
moved out
and set up home
in a piece of free verse,
situated
just on the outskirts
of Chepstow.
Posted by broken biro at 17:32