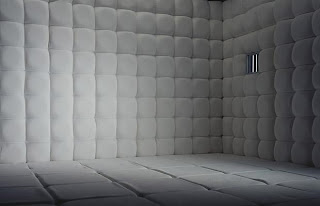 A fellow blogger recently shared this link to a BBC article with me, which seems pretty keen on the idea.

"Depression, madness and insanity are themes which have run throughout the history of poetry...poets are 20 times more likely to end up in an asylum than the general population."

I think there may be a link. But then mental illness is much more widespread than you might imagine. According to the World Health Authority, more than 1 in 3 people will suffer from a diagnosable mental disorder at some point in their lives. That means 20 of my followers ... actually probably more since you're my followers!

A few years ago I had a period of work-related stress and basically went to pieces. I ploughed on for a while, then left my job and went off abroad for a bit and when I came back a year later, was still shaky. I managed to have a panic attack during the relaxation part of a yoga class! - ended up bawling my eyes out uncontrollably. My friend's husband - a clinical psychologist - said it was 'cathartic' and 'people would pay good money for that'. I had some anxiety therapy, read self-help books, stayed at home a lot and eventually came out of it quite recently.

During this period, I didn't try to pretend I was ok. It wasn't anything to be ashamed of, was it? Although in a way I felt it was. But the surprising thing for me was just how many people I know (and yes, a lot of them are poets!) who told me they had suffered similar episodes. People I would never have thought of as having those sort of difficulties. There's a lot of it out there - but I suppose a lot of people don't talk about it.

It seems perfectly reasonable to me that those people who perhaps examine the world more closely ('creative types') are the ones most likely to find it wanting. The more deeply you look into the world, your own life, society, the more demons you are likely to find.

"Men have called me mad but the question is not yet settled, whether madness is or is not the loftiest intelligence"
Edgar Allan Poe

There's more about the links between creativity and schizophrenia here.

Email ThisBlogThis!Share to TwitterShare to FacebookShare to Pinterest
Labels: poets