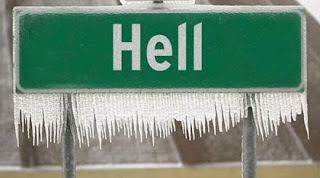 I don't mean the title in a bad way - I was just trying it out for the tourist board of the Norwegian town called Hell... which quite often freezes over.

If the Aztecs knew about Norway, they would have thought it was Hell anyway... not because they have a fear of fjords or are troubled by trolls, but they believed the dead travelled to Mictlan, 'a neutral place found far to the north' - and if that isn't Norway, I don't know what is.

I've never been to Norway, but I may have already been to Hell. The Jewish / Islamic 'hell' is Gehenna - the valley of Hinnon outside the old city of Jerusalem where unsavoury types used to make burnt offerings of their (or possibly other people's) children. It came to be used as a general term for 'the place where bad people go for a good burning'. I'm paraphrasing here.

I love the way that so many places mentioned in the Old Testament are real locations, not made up Heaven's, Purgatories or Valhalla's. I've been to Armageddon... also know as Har Megiddo in Northern Israel, where 'the final battle' is supposed to take place. It isn't much to look at but there is a warren of tunnels underneath, where I once had a romantic interlude. Well, they say that if it's the end of the world, you might as well make love.

Incidentally, that was the second time I've returned unscathed from the end of the world (the first is here).

So what's YOUR idea of Hell?