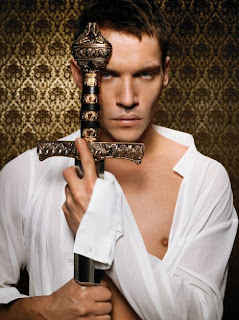 I grew up with The Penguin Book of Comic and Curious Verse, as I've mentioned before - and I loved those Cautionary Tales the best.

Matilda with her dreadful lies, Henry King (pictured left) who chewed string, Jim - who ran away from nurse and was eaten by a lion... the great Hillaire Belloc was the author of many of my favourites which can be found, nicely illustrated by The Baldwin Project which 'brings yesterday's classics to today's children.

It wasn't the horrible fates in themselves that attracted me, it was more the style of writing - faux serious, ridiculous rhymes and romping rhythms - and the escalating series of disasters where one thing led to another.

I attempted to write a cautionary tale this week - on the dangers of giving up blogging. It was addressed to Dave, (who is often first to comment on my blog): Reverend East – who gave up his blog but then realised he had nothing better to do. It sorto of works, but it's not nearly dark enough and while I was writing it he decided to start blogging again, which rather spoiled the ending I'd originally planned.

According to Wikipedia, authors of the cautionary tale were not obliged to abide by the usual rules of etiquette and gruesomeness was positively encouraged because they were meant to horrify a small child into Sensible Behaviour and Right Thinking.

I can't help thinking this sort of thing is probably a bit frowned on these days by those same right-thinking people due to their delight in disaster and uncomfortable overtones of child abuse.

There are no right-thinking people still reading this, are there? No? Then here's one you may never have come across . . .

Who caroused in the Dirt and was corrected by His Uncle