Games you can play in a library 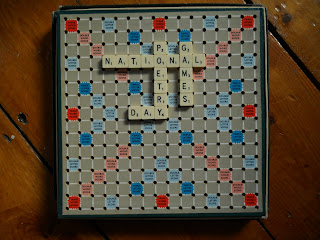 Now I don't want to risk monopolizing National Poetry Day (today folks!) but I just thought I'd mention that this year's theme is 'games'.

I assume it refers not just to games in the traditional sense, but to mind games, war games etc and also to sports... which I don't 'do.'

You don't need to be a mastermind to realise lots of games are relevant to library work. Just yesterday I was playing Jenga with the crime books... which is a bit of a taboo. Then someone called my name out, which distracted me: 'Clare Kir...?'

Plunk! I'd dropped them all - it was quite an operation sorting them again - I needed a couple of people to help me scrabble around and then check them. The checkers had been looking for a copy of Othello, or some other trivial pursuit.

One of them - Marj Ong - kept complaining about the draughts in the crime section until I had to poke her and twist her name tag till she shut up and went off to look for a book about pontoon bridges requested by a Mr Cribbage. Then a borrower came up to me and said: "Have you got 'The Hungry Hippo' by Sue Doku?" I said: ' I'll have to check, mate.'

But before I go, of course I've written a poem for National Poetry Day... but it's quite long so I'll just leave you with the final stanza (I have to say 'stanza' on NPD):

At least in a game at the end of the round
as the bricks fall or the buzzers sound
you slide down the snake without visible bruises,
it's back in the box for the winners and losers:
the tiles and the tiddlywinks, aces and kings
the pawns and Park Lane hotels and such things
and your hurt pride or your pile of winnings,
back in the box till the next beginnings -
operation successful, hippo fed,
game over and time for bed.

Well, looks like there'll be no outdoor games today - there's a cold snap coming. When you've found the 22 games hidden in this post, you can have a look at this game you could play in your local library: