New Year's Eve... live from a sofa near you 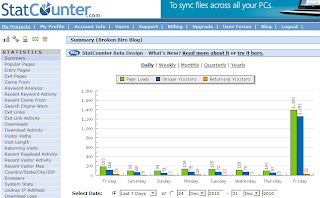 Firstly I must tell you - something weird happened tonight with me and Darth Vader.

Bear with me. There's this guy (or gal) calling themselves Darth Vader on Twitter, and they asked for a three word description of the Dark Lord of the Sith. I replied saying I couldn't do it in 3 words, but gave a link to this blog post. 'Darth' re-tweeted my link to his quarter of a million followers. So suddenly (not that I follow my stats on Statcounter or anything) I've had 1500 people (and counting) visit that post...

...for an average of 5 seconds.... hahaha! Andy Warhol was wrong - not even fifteen minutes,

added later: ... although Darth doesn't tweet that often so I'm still getting hits from it, and a few new followers, and a great story which both self-agrandises and self-denigrates... but does end up with people wanting me to explain (in detail) what Twitter is and what's the difference between Twitter and Facebook and Blogging and Linked-in and my arse. (Not really - just added that in to see if anyone was paying attention.)

It just goes to show how many sad, lonely people who don't get invited to New Year parties are getting something out of Twitter, and the internet. It's nice for us them.

I've been trying to be positive, what with my top Christmas pressies, and my highlights of 20210 (hey... I can't drink tequila and type!) and not mentioning the BAD BITS and the CONTINUING SAGAs and the TROUBLES AHEAD. But really.

Must I bear alone the trauma of my mother's gift of a leopard-skin shower cap (and matching snuggle) and 48 boxes of chocolates? Could be worse - my BFF got a doorstop, a tea towel, teabags and (ahem) 16 random library books.

Anyway, there's some more cheap fizz en route so I'll stop here. But if you're reading this tonight, here's some comfort for you - 'staying in' is the new 'going out'. Twitter said so. But then it says a lot of things.

HAPPY NEW YEAR EVERYONE! Cheers!! *raises can of Stella and gets all teary...*