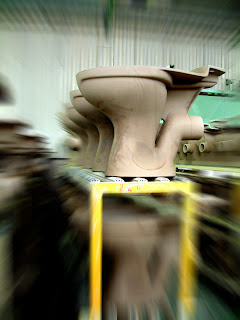 I'm cat-sitting for my brother this week in rural Staffordshire. I mean for his cat. My brother isn't a cat. He's a solicitor. (Not the cat. She's a cat.)

The cat is skittish and sixteen - which makes me nervous - and I'm more of a doggy person anyway, but my brother does have an extensive DVD collection and no builders next door.

Anyway, he lives in the little town of Armitage which is famous for one thing only - it is the home of the Armitage Shanks factory (it's name has now changed, but not for the purposes of this post), where all the toilets and wash basins come from.

It's about as far as you can get from the coast (nearby Ashby de la Zouche claimed it was, until the Ordnance Survey declared that Church Flats farm up the road in Coton in the Elms claimed that distinction). How far is this? our American friends might ask. A whopping 70 miles. That's right - you can't get further than 70 miles from the sea in England.

But there are many local canals and if you go walking along them you come across the curious sight of rows and rows of ceramic basins ready for delivery, and for the ablutions to come.

It's time for my toilet poem.

Yes, I know - another post involving toilets. But I'm done after this.

Please note the complete absence of poo in this toilet poem*

I'd be the first to agree this isn't a great poem, but it was recently one of those with a Staffordshire connection commended (out of 700 entries) in the Stafford Poetry Prize. I'll quote the judge, Michael Hulse: "...these poems had real strengths, and stood out by virtue of their clear individuality from Staffordshire poems that merely touted the county as the best (etcetera). This competition is for poems, not for tourist board slogans!"

I sense the organisers liked it less than he did!

This is toilet country, basin land.
There's nowhere else in England
further from the sea.
Outside the canal-side factory
ceramic stockpiles wait
on the stagnant banks
at Armitage Shanks.

Like mouths of pearly teeth,
swarms of albino beetles,
the Empire’s storm-troopers white helmeted,
shoulder to shoulder, the bowls are
fired up, ready for action
waiting in ranks and ranks
at Armitage Shanks.

A canal slinks past:
sluggish, barely washing
the painted barges stately slow
dribbling, land-locked, nowhere else to go.
Its patient algae clothes
each broken sink that sank
near Armitage Shanks

How lavatories dream on chilly rims
how sinks and bidets yearn
for pedestals and plugs
for running water, urgent and thorough
a rush of liquid traffic
flushing pipes and tanks
from Armitage Shanks.

Only rain sets cisterns tingling
a gentle benediction
of wet anticipation
maddening the shift-workers inside
with the plink... plink... plink
of their chattering thanks
at Armitage Shanks. 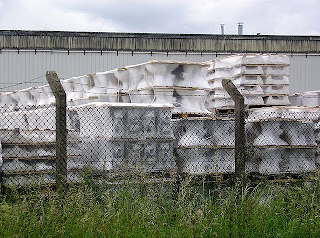 * If, however you want a pee poem - try here