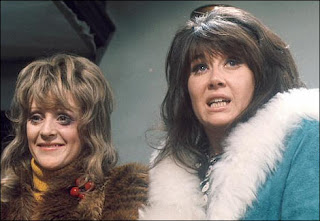 No not those The Liver Birds

(Not the Liver Bards, either - a new poetry open floor starting in Liverpool next month. ...I don't think all the poems have to be about liver.

The might even be a folk group in Merseyside called The Liver Beards. Not them either.) 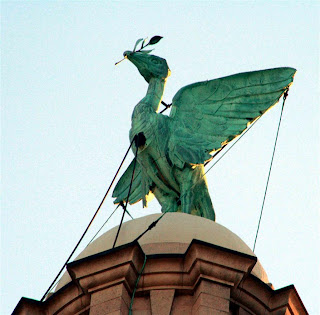 The symbol of the city of Liverpool (also the City Council and a certain football club), the 18 foot copper plate birds face opposite directions - one looking over the city, one over the Mersey estuary - from the top of the Liver Building at the Pier Head.

I live 'over the water' from Liverpool. Not as in New York or Ireland, but just across the river, so it's fantastic to see how well the city is doing since being European Capital of Culture in 2008 - there's a new since of energy and optimism. Swanky new developments like Liverpool One were built just before the credit crunch and are doing well - but those old birds are still keeping an eye on everyone...

We're held up by wires like
threads of giant spiders webs,
look down on cranes and construction sites
the dandruff dust on Pier Head,
the city struggling back to life,

bald headed businessmen,
in Matchbox cars, red stop, green go,
the tide coming and going in great gulps.
We love these new buildings – they are
mirrors where we preen ourselves.

We are gritty and ancient, wings
spread like rumours across the city.
We make a nest in history,
but two beats of a wing and we could fly
on thermals rising up from heated streets.

It's hard to perch so long, so still,
but we have a bird's eye view;
anywhere you see us, we see you –
across the city, the suburbs, the water,
every movement, everything you do. 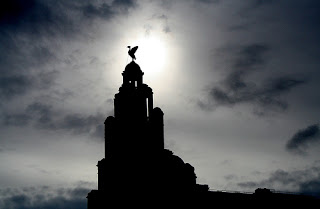