Gone with the wind 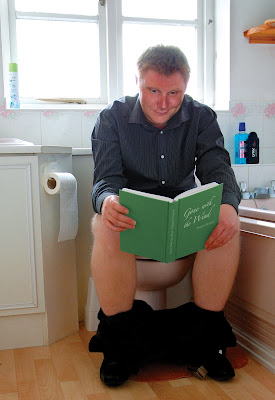 I showed you some of the publicity pics for previous Wirral Bookfest in this post  but I have since got my mitts on 'the one that got away.'

The idea of the campaign was to have people reading books relevant to their situation e.g. we got the head of the Special Initiatives team (no - I'm not making that one up!) to pose in a Pie Wagon reading 'Life of Pi' and a library officer to stand on a chair reading 'Of Mice and Men' with a little white mouse on the floor nearby. You get the idea.

When James, the graphic designer, suggested this chap on the toilet reading Gone With The Wind  I had misgivings, but the library people were unequivocal in their response: No way!

I was away the following year so James tried - and failed - to slip this picture under the parapet again.

He still wanted to do it this year and doesn't seem to grasp that it doesn't promote reading, books or libraries in a positive way. Despite the fact that it looks like the guy has one enormously inflated gonad and the book is far too slim to be Gone With The Wind, what advertiser would want 'poo' to be the first thing you think of when you see their publicity? But most of all - do we really want to be pushing the fact that this guy might have been the previous borrower of the book you just took out?

If you're local - or even if you aren't - here's a link to details of this year's Wirral Bookfest (11-17 October). The publicity material isn't out yet, but I can pretty much guarantee this man won't be appearing in it.

I don't know who he is, by the way. But I hope he got time off in lieu for taking part in the shoot.