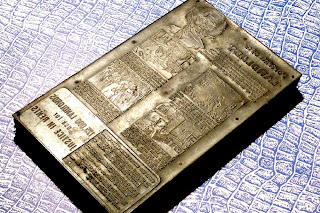 I am girding my loins

This year I will really put my shoulder to the wheel, both feet forward and 'my back into it'. I'll slather myself in elbow grease, knuckle down, take the future in both hands, keep my finger on the pulse, my eye on the main chance (and the ball) my ear to the ground, nose to the grindstone, both hands on the wheel (I may need more hands).

No - I'm not taking a course in contortion. I'm simply going to try harder to be a better writer. But there's something about trying harder that brings all the clichés home to roost - and 'better writers' should avoid them like the plague.

Wikipedia - which has clearly become this recumbent Earthling's 'Hitchiker's Guide to the Galaxy' - defines cliché as a phrase 'over-used to the point of losing it's original meaning or effect', but I would argue with that. More that it is so over-used it loses its original impact.

When I say 'If it ain't broken, don't fix it' that's exactly what I mean. It's just annoying that - especially as a writer - you're not supposed to reel out the same old tired phrases, but think of new ways of saying what you mean.

The word cliché is from the French printing term for a phrase so regularly-used that it is cast in its entirety rather than composing it from individual letters or words each time it is rolled out. This is also called a stereotype. (I used to think this meant 'typing with both hands'.)

'Cliché' is meant to emulate the sound of the metal being dropped into the matrix - a mold for casting letters or phrases. Oh, sorry - I shouldn't have told you that. I forgot..."no one can be told what the Matrix is. You have to see it for yourself." Thanks, Morpheus.

In cliché heaven
everything’s as right as rain,
they had a good innings,
and we’ll never see their like again.

In cliché heaven
death is not the end
and when you find Jesus,
you’ve found a friend.

In cliché heaven
saints and angels with Percil-white wings
are singing of millions of beautiful things,
and God in his wisdom,
God with his beard,
is moving in ways that are frankly weird,
dear God, his cherubs like elves,
is helping those who help themselves.

In cliché hell
after the candlestick, book and bell
we’ve come in a handcart
we’ve come with our cat
(who’s got no chance, we’re sure of that)
and the devil’s busy making plans
for all those lovely idle hands.