Zombie Wombles and the Keywords of Destiny 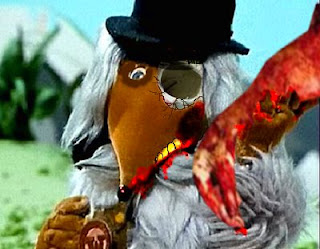 Just to COMPLETELY change the subject: Do you ever look up in Blogger stats or Statcounter to see what search keywords brought visitors to your blog?

Zombie Womble. That's what brought someone to mine*.

Over at Cultural Snow, the erudite Tim Footman was saying just the other day (in this post: Jammy Helen Mirren) how many people stumble across his blog when searching for semi-clad ladies, just because he may have mentioned them in passing. Similarly, Army of Dave is struggling to cope with being associated with a contemptible racist politician following the runaway success of his Nick Griffin Question Time Drinking Game.

It's a sobering lesson in being careful what you post about - these things can come back and bite you... A bit like Tobermory here.

... but on the other hand (and I wonder what Tobe did with the other hand?) it could point the way to a GAP in the market. Maybe, I thought, there ought to be somewhere people can go for a zombie womble if they want one?

By the way - what do you think at my first attempts at image manipulation? It was done with a free programme GIMP 2.6 which I am told has much of the functionality of Photoshop without the price tag.

Underground, overground, back from their tomb
The Wombles are Zombies and lurk in the gloom
Munching the brains of the people they find
Great Uncle Bulgaria’s eating mankind!

Underground, overground, up from their graves
Nothing is wasted, everything saved
Matted with black and malodorous mud
Lumbering Wombles are hungry for blood!

And in their foul burrow there’s always a store
Of bits of old bodies all covered in gore
Where Madame Cholet, her apron streaked red
Is cooking up something to feed the Undead

Bumbling, stumbling, Wombling free
They want to recycle the best bits of ME!
Oh no! Orinico is coming to get me!
The Wombles of Wimbledon Common all ATE ME!!