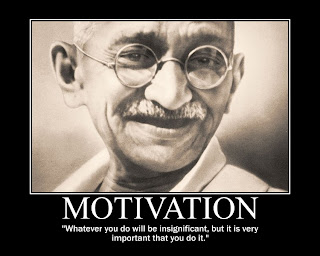 I love the idea of many people taking small actions to effect change.

Alright, so my 'A Penny for Them' campaign might not work - I have been roundly told on Twitter that I clearly know nothing about banking.

But I still love the Gandhi approach - where he encouraged India's poor to wear home-spun cloth instead of British-made textiles and led a massive march - the Salt Satyagraha - to make salt from the sea in protest against the British salt tax (and possibly peppercorn rents).

And, I know it's probably BAD and WRONG to compare some little old ladies* in Buckinghamshire with an idealogical leader of the developing world, but stay with me...

I wanted to share this story with you from last Saturday's Independent - basically the Friends group of a threatened library of Stony Stratford, Bucks, sparked off an online campaign which rallied together all the registered library-users in their town. Between them they managed to withdraw ALL the books over the space of few days. I LOVE the idea of this. It wasn't violent, it was threatening to any innocent bystanders, but it MUST have shown the local decision-makers the strength of feeling in the town.

Some comments after the article sneer that as libraries are a free service, it doesn't matter how many books are withdrawn "...it still costs the same to run them". This misses the point: as a local service paid for by council tax, the number of borrowers is of vital significance. Whatever additional services provided and whoever they're a life-line to, the value of libraries is still measured almost solely by the number of books withdrawn.

So when did YOU last visit YOUR library?

*(other genders, ages and sizes are also available)

Email ThisBlogThis!Share to TwitterShare to FacebookShare to Pinterest
Labels: Libraries