What dreams may come..? 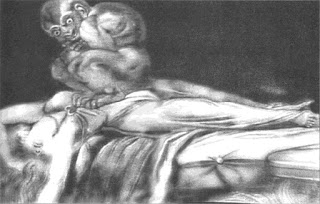 Poor old young Dave has been suffering disturbed nights over at Dave - The Blog and I sympathise.

Anyone who says to me: 'In your dreams' hasn't been there when the molten sky is falling and we few survivors are sheltering in caves, or when I come out of primary school one afternoon and it is years later and my family moved away a long time ago, or when everyone in the room is about to turn into a monster - but no-one knows which kind so you have to watch for snake tongues, claws...

As a child I lay awake in the fear of having nightmares. More recently I learned to quite enjoy them, their imagination. But they're still odd. My friend's husband is a clinical psychologist. He says it isn't what happens in your dreams, it's how you feel in them. And he says that everyone in the dream is really another projection of yourself.

But it could be worse...

I was in my 30's before I had even heard of sleep paralysis or 'night terrors'. It occurs when the consciousness is still awake while the body is shutting down for sleep and the symptoms are the inability to move, pressure on the chest, an acute sense of danger and terrifying hallucinations. 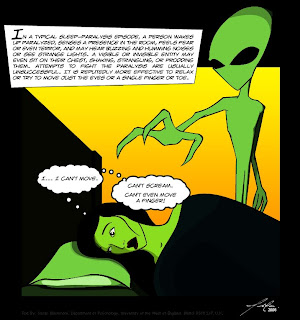 It's believed that the old idea of an incubus sitting on your chest comes from this and potentially a good number of 'ghost' sightings and 'alien abductions' - with the symptoms being so very realistically physical and so little heard about it.

Oddly, my first experience of sleep paralysis (that I remember) was not long after first reading about it. I had just moved house - one of the triggers can be a change in environment or lifestyle (and I've certainly had a brilliant flying dream after another house move.)

I 'saw' a malevolent, shadowy figure in the corner, 'heard' indiscriminate, but evil voices and felt a heavy pressure rolling over my body from head to toe. Throughout all this I knew I was wide awake. It was genuinely very frightening and would have been so much more so if I didn't have a clue what was going on. It's happened to me a couple of times since then and, whilst scary at the time, is fascinating.

After this, I started asking people whether they had heard of it or experienced it. And although most were blissfully unaware of it, I was shocked how many people had had it without it being common knowledge. At least three people I know have suffered from it on a regular basis all their lives - one even thought she could never marry because who would want to share the bed of someone who spent their nights in terror?

Around the world there are different beliefs about it and word for it. And guess what? The word nightmare is derived from the old Norse word 'mara' or... a goblin that rides on your chest.

So - how many of you have had this or heard of it? And -really - what is your worst nightmare?