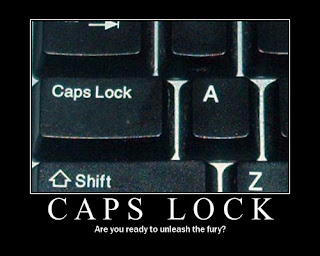 Something I learned when I worked in Public Relations (and which is also a matter of common sense) is often ignored or forgotten by graphic designers - beware of capitals!

Capitals or Upper Case if you want to be snobby - or majuscules* if you want to get all technical - help us to signify new sentences, denote proper names (as opposed to improper names e.g. 'you arse!') and attach importance or emphasis. These are some of the benefits of not having a unicase language, or being German, where random capitalisation appears to occur.

(Of course, you can also attach importance or emphasis using other devices e.g. italic, bold, underlining or size or a big red felt pen.)

EVEN BEFORE THE USE OF CAPITALS BECAME SYNONYMOUS WITH 'SHOUTING' IN EMAILS, TEXTS AND SOCIAL NETWORKS, THEY WERE BAD AND WRONG.

Even before the use of capitals became synonymous with 'shouting' in emails, texts and social networks they were BAD and WRONG.

1. Because it is much more difficult to take in blocks of text that are all exactly the same height. We need those ascenders and descenders to speed up word recognition, which is done by shapes and patterns as much as anything else. UPPER CASE kills - don't believe me? Read Capital Offenders

2. Because IF YOU emphasize everything, you EMPHASISE NOTHING

I'll finish with a little ditty from Roger McGough: