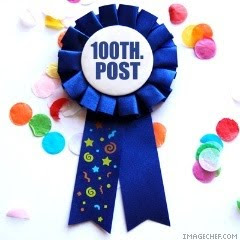 I thought I'd missed my 100th post. I was counting them from my 'edit posts' list, but that figure included draft notes of future posts. Doh!

So hurray for my 100th post! To celebrate, I'm going to take the 7 Link Challenge from ProBlogger.

My First Post: Where do ideas come from Mummy?  In which I suggest 'free writing' to extract weird stuff from your subconscious... hey, it works for me!  I had one comment...I was out there!

The Post I Enjoyed Writing the Most: I'm torn between two (1) Why are there so many songs about librarians? was great fun because I had put a call out on Twitter for spoof library songs and got some brilliant ones which I then did a post about, giggling all the way and (2) National Double Entendre Week for obvious reasons.

A Post With a Great Discussion: I couldn't choose one from here because I get such great comments on a regular basis, so I'm cheating a bit. I'm also one of the 'cooks' on the Fridge Soup blog and this went up there, although perhaps here is its rightful home: Dr Strangelove Actually - this was great fun because loads of people joined in.

A Post I Wish I Had Written: 'How I made my first million'... oh, it has to be a real one from someone else! Gosh that's hard... [three hours later] This is where I wish I'd somehow bookmarked my faves as I'm sure there are ones I've forgotten... don't make me choooooooose! But I am especially envious of Fran's lists & literary rewrites in Being Me - like this one on 'cyber lit, Moptop's National Euphemism Week and #Banned lists. Oh and pretty well anything by the erudite Dogberry at The Inky Fool, a fine example of which is: Snarling Snobs and Sniggering Sneaks 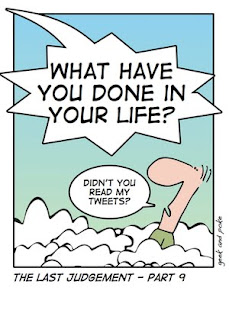 A Post With a Title I'm Proud Of: This one, of course!

My Most Helpful Post: Probably Twitter - 7 Steps to Getting Started because I know a lot of people find Twitter as confusing as I did when I started out, but I do think I've got the hang of what it is and what it's for now

I've probably missed some cracking posts from you all, I'm keen for followers to take this challenge* or at least to leave a link in the comments to your best post or the one you wish more people had read.  Pleeeeeease... it is my 100th!

You know how to put a link in comments don't you? You just put your lips together and ... no, that was something else. Here's how: put the html code below into your normal comment - the parts between the <>brackets won't show but have to be exactly right.  Notice how I've spelled/spelt 'website' wrong deliberately to show you how easy it is to bugger this up - but have a go!:

*If you choose to do your own 7-link challenge, please do say so in the comments (and on  ProBlogger comments too!)

Email ThisBlogThis!Share to TwitterShare to FacebookShare to Pinterest
Labels: blogging