The Oxford Comma... and friends 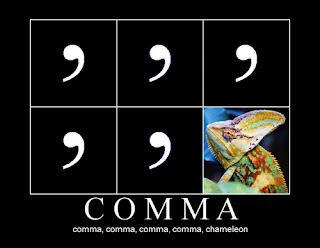 I first heard of the Oxford comma on one of Dogberry's posts at Inky Fool.

Punctuation named after places? Whatever next? Apparently it's the comma that you could (but may choose not to) put before the 'and' in a sentence list.

As an example, here's what Simon Says at Writers Bureau had to say on the subject:

But why is it called the Oxford comma? And are there other geographically-related punctuation marks I should know about?

The Papworth Colon - for colons which need to be removed forthwith

The St Martins Lane* Apostrophe - in response to the Grocer's Apostrophe, this is for apostrophes notable only by their absence.

The Wallasey Ellipsis - any ellipsis with the wrong number of dots, which disregard the laws of God and man (in Wallasey there are no less than three roundabouts where the usual rules do not apply)

Watford? Hooton? Howarth? Wensleydale? Somewhere in the Wy or perhaps Pendle – where the whiches come from?

If there are any punctuation marks associated with place names that any of you have made up know of, do tell!

* No one's too rich to need the occasional apostrophe