Taking affront at a font 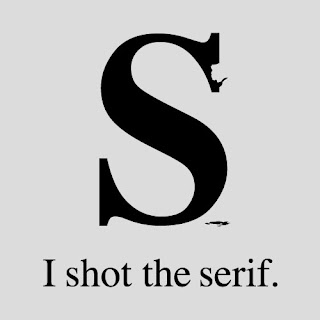 It's been coming on a while. But it's getting stronger. Every so often Word seems to forget my defaults and goes back to Times New Roman. I almost can't bear it any more.

They say a serif font's easier to read, more literary.  I particularly loathe the way some people print poems out in curly serif scripts you can barely read because 'it looks more poetic'. More poetic, my arse. If the words don't do it, don't make the font do it!

Some editors require your work in New Courier, which is even worse. They have their reasons - every letter is the same width, which is useful to them in ways we can not fully understand (or should I say, I cannot be arsed to research just now?). 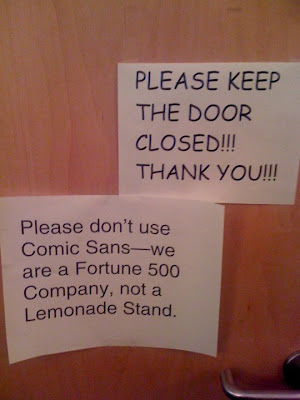 But don't you think a nice sans-serif is much cleaner? It's rounder and more 'with it' in ways the expression 'with it' will never fully understand. Doesn't have to be Arial. Tahoma's nice too (oh, Tahoma!) and I use Trebuchet for this blog. I did go through a phase of doing everything in cheerful Comic Sans but it's generally considered to lack seriousness. (See right)

1. Incidentally the word 'font' is from the same source as fondue  ('something which has been melted') after the casted molten metal typesets used to be made out of.

2. According to Wikipedia (the 'font' of all knowledge) the reason sans-serif has become the font of choice on-line is because serif fonts can show twittering on the horizontal serifs. And that has nothing to do with Twitter!

So what is your font of choice, and how strongly do you feel?

Email ThisBlogThis!Share to TwitterShare to FacebookShare to Pinterest
Labels: words