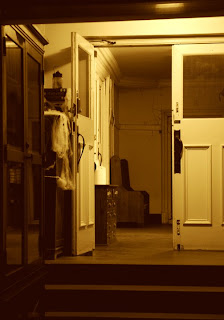 I love the way the publicity for Wirral Bookfest described my branch - Wallasey Central Library - as 'Wirral's MOST haunted library'. It implies all the others are just slightly haunted, or at most averagely.

So we had famous horror author Ramsey Campbell - he's local - to give a talk and offered the added enticement of a spooky backdrop and a 'ghost' tour of the premises along with a history of the building.

I'd turned up (on my night off) because I was interested in Ramsey Campbell's writing life and tips, but the group was divided in two and one half had the tour while the other half asked questions. 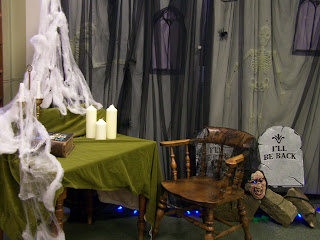 I'd been roped in to 'make sure everyone who started on the tour finished it' upstairs. So I missed all the questions.

Did I mention the library I work in is haunted? There are stories of strange noises, doors opening, an exorcism that not only failed to get rid of restless spirits, but may have enticed some more out of the graveyard next door!

The tour was given in the spookiest upstairs corridor by our rather severe reference librarian. She told us about the caretaker who hung himself there, and of another, more documented, tragedy: a live-in caretaker spent many years there but when he was widowed the powers-that-be wanted a married couple to do the job and moved him to a smaller branch. Having lost his wife, his benefits and his home, he was heart-broken. He moved in with his son and daughter-in-law. One day they found a note from him on the table. Rushing upstairs they found him lying on the floor of his room in pools of blood. He had slit his own throat.

The first floor corridor we were in - which links the main library with the junior library - was known, she said, for strange 'feelings' - a bone-numbing cold, the sense of not being alone, the committee room door that keeps opening when there are people inside, but never when there aren't. 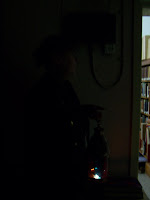 I go along it to the staff room on a regular basis and nothing has ever tingled my spine or curdled my blood, but after hearing the sorry tales of  hangings, throat slittings, mysterious footsteps etc, I was left in the corridor on my own in the dark to wait for the next group.

Then I heard footsteps.

It's a rambling old building, the floor changes level, the corridors aren't straight. There's a winding stone staircase that leads up from an untrammelled part of the ground floor to the floor I was on and then up to the turret. (Yes, we have a turret.)  The footsteps were coming up the stairs. The sound stopped for a second, a pause at the top of the stairs, and then continued towards me. A slow, steady tread. I couldn't see who it was because the corridor is crooked. And we'd turned the lights out earlier for 'effect'. I felt a chill. The footsteps came closer... 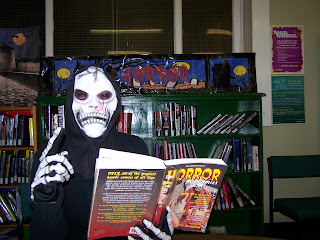 ... it was my colleague Jane on her way back to the ladies!

On the plus side, I bumped into a chap whose creative writing evening classes I used to go to in that very building, some (ahem) years ago. That isn't him in the picture - it's me getting into the 'spirit' of things.

So there you go - it is clearly Wirral's MOST haunted library - it stirred up ghosts for me!

Email ThisBlogThis!Share to TwitterShare to FacebookShare to Pinterest
Labels: Libraries